The Acer S1385WHne combines portability and output brightness to serve primarily on-the-go business operators. And even though it’s super affordable, starting around $750, the projector performs extremely well. The images are cast in native WXGA resolution and the projector delivers 3,200 lumens of estimated brightness. It works best in small- to mid-sized venues.
Of course, with its sub-$1,000 price tag, the S1385WHne isn’t equipped with a long list of features, but even so, it’s not a complete bare-bones piece of hardware. First, it’s equipped with dual HDMI ports – which are very useful for business presenters. Plus, its short-throw lens works well even in cramped venues. Bottom line, if you’re looking for a budget-friendly projector that gets the job done, the S1385WHne is well-positioned for PowerPoint presentations and occasional video. 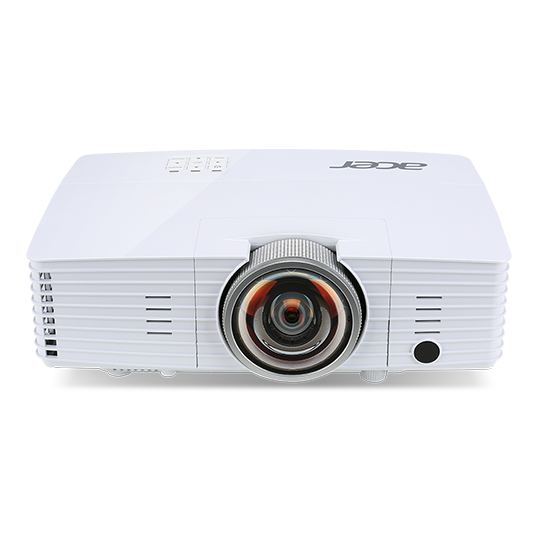 Acer S1385WHne: Most Useful Specs
A number of the Acer’s features are standard fare when it comes to projectors released in 2015, but there are a few points that help this projector stand out from the competition. Its best features include: 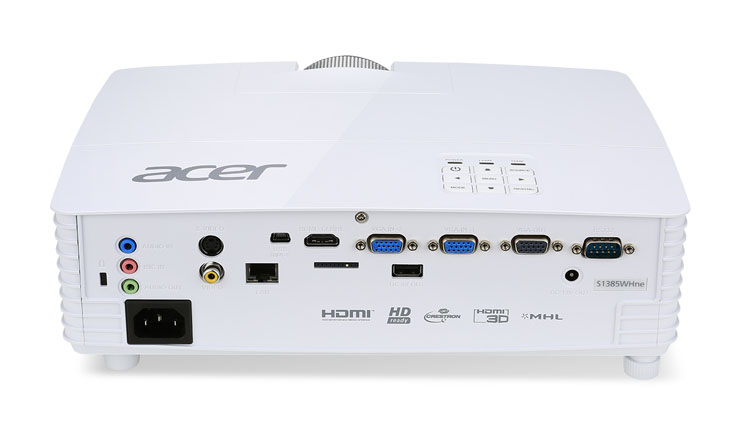 Competitors to the Acer S1385WHne
There are a number of entries in the sub-$1,000 category, but the Acer S1385WHne offers a little something more compared to its competitors. For starters, the Acer is one of the brightest in the category, and it’s also priced competitively. Here’s a look at some of the competition:

Looking for an Acer S1385WHne replacement lamp? Shop and save on MyProjectorLamps.com. We offer the best prices on replacement projector lamps, fast shipping, and unbeatable selection.

In 2011, the Acer H9500BD was one of the first 3D projectors to hit the market at a sub-$2,000 price. Thanks to its pricing, it quickly found a loyal audience of operators. But that was just one factor that made it a fast favorite. The projector was also equipped with several technologies that delivered impressive image quality. For example, the H9500BD’s dynamic iris increased the overall black levels, providing rich dark scenes.
Overall, the 3D specs are fairly impressive too. The projector is capable of displaying a variety of 3D content – from Blu-ray to PC 3D – and the image quality is fairy crisp, bright and clear. Today, the projector’s specs are a little aged, as many of the components that made it unique in 2011 have become commonplace. But at the time, the H9500BD was a unique and powerful projector for 2D and 3D content.

Acer H9500BD: Unique Specs and Features
Although the projector is capable of 3D imaging, it’s particularly impressive as a 2D projector. Image quality and color performance are far above-average and near flawless, especially compared to similarly priced projectors. Features that made this possible included:

How does the Acer P5207b perform as a multimedia projector? On one hand, the two-year-old Acer provides satisfactory image quality in its native XGA resolution. Plus, the image is extremely bright, which makes this model perfect for large venues. The projector provides an estimated 4,000 ANSI lumens of brightness – powerful enough for spaces with modest levels of ambient light.
But the projector does have its shortcomings. For one, compared to similarly priced models from various manufacturers, the Acer P5207 is missing some features that have become fairly common in recent years, including WiFi connectivity. That might be problematic, especially for web-based business and classroom multimedia presentations.  Yet, overall, for the price, the Acer P5207b is a solid piece of hardware that delivers a crisp image and a number of functionalities. In other words, it competes well with similarly priced multimedia projectors. Here’s a look at some of the specs:

Rated at 4,000 ANSI lumens, the biggest advantage of the DLP 3D P5207b is its brightness. Other projectors in the price range generally hover around the 3,000-lumen mark. Plus, additional image specs, including its 10,000:1 contrast ratio and native XGA resolution, which deliver a data image that’s clear, even when projected on large screens. In terms of color performance, the Acer also delivers. Featuring Acer’s ColorBoost II+ technology, the colors are vibrant, and compare nicely to other DLP-based projectors.

The Acer P5207b is equipped with two built-in speakers, which gives the projector an advantage. Other similarly priced projectors have either or one or two, and some require external audio. They are dual 5-watt speakers, which is substantial enough for large venues, although for the largest rooms, the speakers may require amplification.

Another advantage: The Acer also has some advanced technologies that enable setup flexibility. For one, the Acer’s lens has a 1.6x optical zoom. This makes it easier to resize images to fit a screen. Plus, the projector has a superior 2x digital zoom, which enables users to zoom in on particular images.

On one hand, the Acer’s bulb is fairly bright, but it also has just an average lamp life. The bulb (Replacement Part No.: MC.JG211.001) is a 280-watt OSRAM bulb. There are three settings, the normal mode, eco mode and an advanced eco mode. Lamp life for the Acer ranges from 3,000 hours (about average) up to 7,000 in its advanced eco mode. In its eco mode, though, the Acer has a 4,000-hour lamp life, which is average compared to other projectors.

For presentations with short video clips, the Acer is capable yet underwhelming. Video performance is average, at best, and leaves something to be desired. Plus, in its native resolution XGA, videos aren’t crisp and clear, and although it does support higher resolutions, often video image is lost.

The Verdict: Should You Buy the Acer P5207b?

Starting at roughly at about $738 US, the Acer P5207B is slightly higher in price than other two-year-old projectors with similar specs. But the projector leaves something to be desired. Although it produces fairly crisp and clear images, the limited number of ports, average video performance and limited lamp life are all factors that diminish its value. Simply put, you could find better projectors for the price, however, the Acer’s brightness might be the redeeming quality that makes you go out and buy one as it definitely fills the room.

Top 9 Classroom Projectors Under $1,000 from 2014-2015
Finding the best projector for your classroom or business presentation can be a challenge. What specs should you be looking for? How bright does the projector need to be? And should you opt for a short-throw or long-throw projector?
Fortunately, all of these questions are fairly easy to answer, but before you start shopping, you should know what you’re looking for. First things first, start with resolution.


Classroom Projector Native Resolution Types
Currently, the majority of classroom and business projectors are set at specific native resolutions. This means that they’re designed to display images from particular devices. So if you have a computer with an XGA resolution, you should opt for an XGA projector. This will ensure that the image you project appears the same as it does on the computer.
Common resolutions:

What Else Do You Need to Consider?
You should also consider brightness and throw ratio. First, brightness refers to the image. In large classrooms or in spaces with large amounts of natural light, you’ll need a projector that casts a brighter image or will need to darken the room. Generally, a projector with a bulb rating between 2,000 and 3,000 is sufficient for most classrooms.
Additionally, you should consider throw ratio. Simply put, throw ratio is the distance the projector needs to be placed away from the screen to project an image of a certain size. There are three types of throw ratios: Long-throw, short-throw and ultra short-throw. For classrooms, long throw projectors can be mounted to the ceiling. But short-throw and ultra short-throw projects can be placed closer to the screen, which diminishes the amount of shadows that are cast on the screen.
So Which Projectors Are Best?
Here are a few of the top classroom projectors in each resolution category. Projectors were chosen based on a few criteria, including brightness, price, features and construction. All of these projectors are 2014 or 2015 models.
XGA Resolution
These three projectors provide great data-image quality, long lamp life and they’re also all feature-rich which make these ideal in business and classroom settings. Plus, they’re all offered at unbeatable prices. The NEC model is a bit more expensive, due to its USB thumb drive connectivity.

WXGA Resolution
The top 3 WXGA projectors are all 3D ready. Both the ViewSonic and BenQ are PC 3D ready, while the Vivitek model is Full HD 3D ready. Overall, these projectors provide a lot of value – excellent image quality, built-to-last construction, and long lamp life – and each one would work nicely in the classroom.

SVGA Resolution
As you can see, the SVGA and XGA models are comparable in price, whereas these were once much more affordable than XGA projectors. For the price, these projectors cast bright images, and they data-image quality is sufficient.

These were a few of our favorites that were released in 2014 and earlier this year. In terms of performance, many 2013 models are still very competitive, but we narrowed it down a bit. Did we miss anything? What are your favorite business and classroom projectors released in 2014 and 2015?
MyProjectorLamps.com is your source for the best prices on projector lamps from America’s favorite manufacturers. Order a genuine projector lamp from us today.

Looking for an entry-level home theater projector? You’re in luck. Just a short time ago, the budget-friendly projectors sacrificed image quality, for price. If you didn’t have the budget to pay more than $1,000 for a projector, you could expect sub-par image quality and construction.
The good news is that has changed. Today, there is a range of sub-$1,000 options that provide impressive image quality and that will completely enhance your home theater. So which budget-friendly projector should you choose? Really, it depends on what you’re looking for, but here are 5 projectors under $1,000 that provide excellent picture quality, solid construction, configuration flexibility, and competitive brightness.

5. LG PF85U – The LG PF85U might be the best replacement for your TV. LG bills this as a LED Smart Projector, which means it has a built-in smart TV. The LG PF85U can connect easily to web-based viewing sites like Hulu or Netflix. Also, the projector has a reasonably loud stereo sound system built-in. Where the LG falls short is in image quality. Overall, in dimly lit rooms, the LG performs well, but when more light is present, you’re likely to experience washed-out colors and less detailed images. Also, the LG isn’t 3D ready and there aren’t zoom capabilities, which are two other disadvantages.

If you’re planning a home theater on the cheap, you have options available to you that will enhance your home theater. Is there a clear winner? The BenQ HT1075 is one of our favorites, but depending on the features you’re looking for, all five of these projectors offer something a little different. Plus, they’re all affordable and perform well.